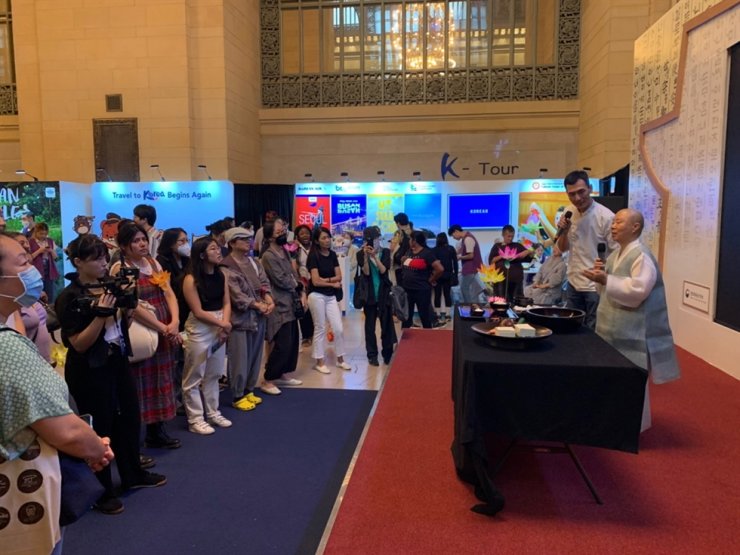 By Park Han-solFrom a one-day Templestay visit to temple food workshops, a number of events celebrating Korea's Buddhist culture are greeting New Yorkers in the heart of the U.S. city until Aug. 29 (local time).Organized by the Cultural Corps of Korean Buddhism under the Jogye Order, the nation's largest Buddhist sect, the "An Encounter with Korean Traditional Buddhist Culture" program kicked off Monday with a temple food session led by Ven. Jeongkwan, as part of the 2022 Discover Your Korea event at Grand Central Terminal.As one of Netflix's "Chef's Table" stars ― who received the prestigious Icon Award Asia 2022 ― the monk was also named a Master of Korean Temple Food by the Jogye Order earlier this year. During the program hosted inside the iconic New York rail terminal, she led the talk, giving cooking demonstrations and a sampling session of the food created from wild and seasonal vegetables in observance of Buddhist principles.Other events offering a peek into the ascetic lives of Buddhist practitioners will be sprinkled throughout the week.Wonkak Temple, located an hour's drive away from Manhattan, will host two Templestay programs ― one for people in the tourism industry on Aug. 25 and the other for university students on Aug. 28.Participants can experience "barugongyang," a formal monastic meal which involves consuming vegetarian dishes in utter silence with not a single grain of rice being wasted, as well as walking meditation and other sessions introducing Korean Zen Buddhist traditions that have been preserved throughout the religion's 1,700-year-old history in the country.From Aug. 27 to 28 at the David Rubenstein Atrium at the Lincoln Center, a series of cultural programs are scheduled to unfold: sutra copying, paper lotus flower making, a barugongyang workshop led by Ven. Jeongkwan and temple food sampling sessions guided by Ven. Jigyeon.There will also be an exhibition of 50 photographs, with subjects including full scenic views of centuries-old "sansa," or Korean Buddhist mountain monasteries that have been designated as UNESCO World Heritage Sites."An Encounter with Korean Traditional Buddhist Culture" will end with a temple food pop-up restaurant hosted at Oiji Mi, an upscale Korean dining spot in Manhattan, Aug. 29.The menu for the first session at the pop-up restaurant, catered by Seoul-based Balwoo Gongyang, the first Korean-style temple food specialty restaurant in the world, will include raspberry wine-soaked cherry tomatoes, black bean soup, "yeonnipbap" (steamed rice wrapped in fragrant lotus leaves) and a dessert with ripe persimmons.The second session, tailored for local chefs and media personnel, will serve a four-course meal under the guidance of Ven. Jeongkwan.